Sources of the law relating to demand guarantees and standby letters of credit.

The law of documentary credits has developed mainly through practice and customary uses; many of its operative rules, irrespective of geography or legal systems, have emerged from the customs of bankers dealing with importers and exporters, and with shipping and insurance companies. Since 1933, the International Chamber of Commerce (“ICC”) has drafted and issued Uniform Customs and Practice for Documentary Credits (“UCP”) i.e. a set of rules issued and regularly revised by the ICC, for the last time in 2007.

Besides this, the ICC has also introduced other uniform rules that can apply to demand guarantees and standby letters of credit, namely the Uniform Rules for Contract Guarantees (“URCG”), the Uniform Rules for Demand Guarantees (“URDG”) and the International Standby Practices (“ISP98”). In addition to these rules, the United Nations Commission on International Trade Law (“UNCITRAL”) adopted a universal legal framework for demand guarantees and standbys called the “United Nation’s Convention on Independent Guarantees and Stand-by Letters of Credit”, also known as “UNCITRAL Convention”.

Due to their highly international nature, general sources of the law of commercial letters of credit, standbys and demand guarantees, are also often international banking practice and the usages in international trade. These are often set out in the rules issued by the ICC. In most countries, there are no explicit statutory rules for demand guarantees and standbys; as a result, disputes must primarily be addressed under explicit contractual provisions, unwritten rules, principles of contract and commercial law, and case law. Certain countries have individually introduced special legislation governing these instruments. In certain jurisdictions, another important source of law for demand guarantees and standbys is case law, also often supplementary to the law in this area are legal writings 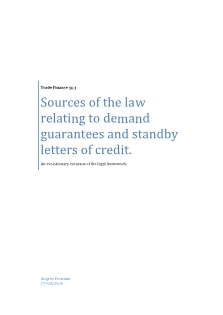