The UNCITRAL Convention - A short survey on the aspects related to fraud and illegality in International undertakings.

In 1966, the United Nations created the UNCITRAL because it desired to play a more active role in reducing and removing legal obstacles to the flow of international trade. UNCITRAL’s aim is to further the progressive harmonisation and unification of the law of international trade and its mandate is to be the main legal body in the field of international trade law within the United Nations system. UNCITRAL was initially composed of 29 states, but was expanded in 1973 to 36 by a General Assembly resolution. Membership is structured so that a specified number of seats are allocated to each of the various geographic regions. This is an intergovernmental body of the General Assembly that prepares international commercial law instruments designed to assist the international community in modernising and harmonising laws dealing with international trade. From 1988 to 1995 the UNCITRAL worked on a Uniform Law on International Guaranty, which eventually resulted in the drafting of the UNCITRAL Convention, adopted  and opened for signature by the General Assembly by its resolution 50/48 of 11 December 1995. States were given a two-year period to sign the Convention, after that they had to accede to it. The Convention could only come into effect after ratification by five states. Furthermore, in terms of article 28 of the Convention, it could also only enter into force on the first day of the month following the expiration of one year from the deposit of the fifth instrument of ratification; as a result, the Convention only came into effect on 1st January 2000. 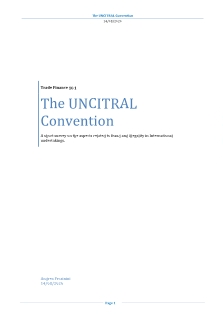