The Avalon prototype has been released to open source as a Hyperledger Lab project at https://github.com/hyperledger-labs/trusted-compute-framework.

Avalon was first developed at another Hyperledger Lab project – Private Data Objects (PDO), which can be found at https://github.com/hyperledger-labs/private-data-objects.

Avalon complies with existing and emerging standards especially,  the Off-Chain Trusted Compute Specification developed by the Enterprise Ethereum Alliance (EEA). The spec can be found at https://entethalliance.org/wp-content/uploads/2019/05/EEA_Off_Chain_Trusted_Compute_Specification_V1_0.pdf.

Hyperledger Avalon enables the secure movement of blockchain processing off the main chain to dedicated computing resources.  This enables:

Avalon is designed to help developers gain the benefits of computational trust and mitigate its drawbacks. A blockchain is used to enforce execution policies and ensure transaction auditability, while associated off-chain trusted compute resources execute transactions.

Preservation of the integrity of execution and the enforcement of confidentiality guarantees come through the use of a Trusted Compute (TC) option, such as

The approach will work with any Trusted Compute option that guarantees integrity for code and integrity and confidentiality for data.  Our initial implementation uses a Trusted Execution Environment enabled by Intel@ Software Guard Extensions (SGX).

This project started in incubation and is now a full-fledged Hyperledger project.

The initial core functionality of the project has been implemented and the community will deliver additional functionality and bring project quality to product level standards. 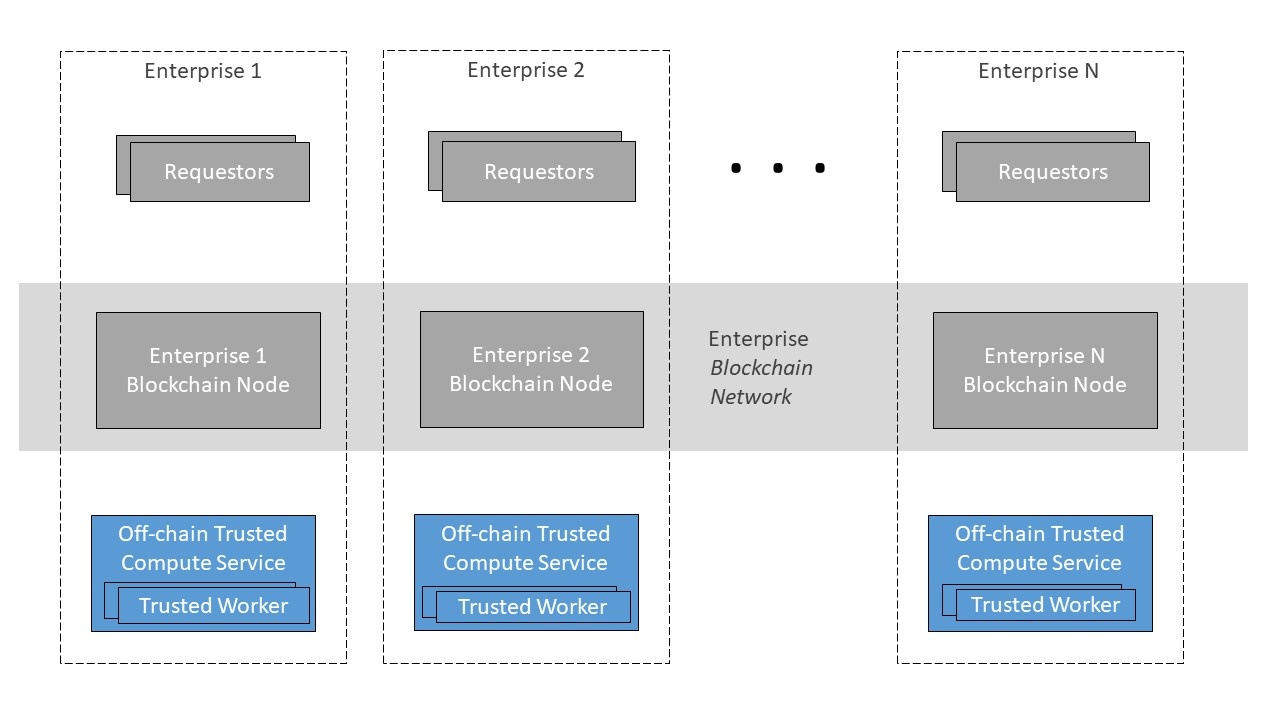 The figure above depicts an example of blockchain with N member enterprises. Each enterprise has Requesters, a blockchain node and one or more Trusted Workers (hosted by a Trusted Compute Service). Requesters submit Work Orders, and Workers execute these Work Orders. Work Order receipts can be recorded on the blockchain. While each of the enterprises in the figure above contains all three major components (blockchain node, Requester, and off-chain Trusted Compute Service), this is not necessary. For example, Requesters from Enterprise 1 may send Work Orders to a Worker at Enterprise 2 and vice versa. Ultimately, an enterprise is free to host any combination of the three elements depicted on the figure above.  Accessing resources across multiple enterprises increases network resilience, allows more efficient use of resources, and provides access to greater total capacity than most individual enterprises can afford.

A diagram below depicts Avalon architecture at a high-level. 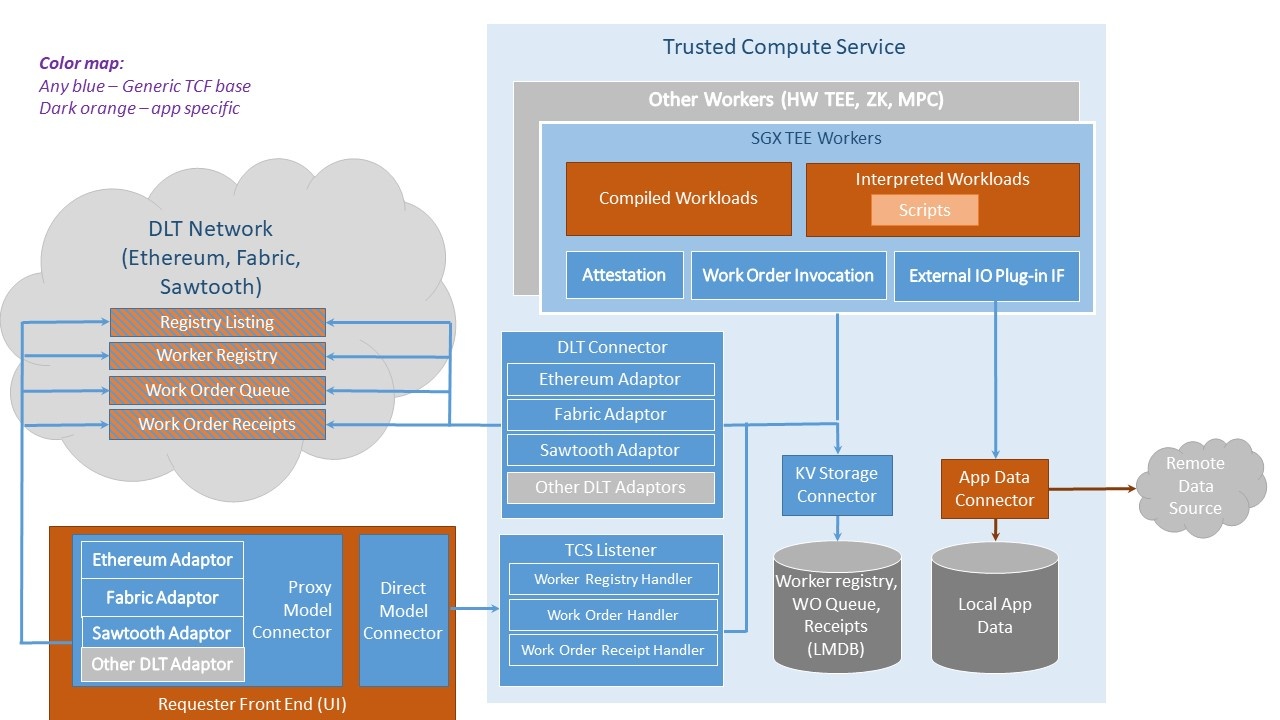 Trusted Compute Service (TCS) hosts trusted Workers and makes them available for execution of Work Orders (WO) that are submitted by Requesters via a front end UI or command line tools. Work orders also can be submitted by (Enterprise app specific) smart contracts running on the DLT.

There are two models of operation:

Direct model was introduced as a complement to the proxy model to facilitate specific use cases that are hard to address by relying on the proxy model alone, e.g. processing sensor data streams (data filtering and pre-processing for IoT or supply chain), handling custom worker key update polices, and aggregating (a large volume of) worker receipts.

Currently, only the direct model is implemented. Proxy model for Ethereum and Fabric will be implemented next.

It is expected that real world applications may benefit from a hybrid model that will combine elements of both proxy and direct models.

Workloads can be implemented to  execute predefined fixed functions which are pre-compiled at build time (written, for instance in Rust or C++),  or can be implemented as runtime script interpreters, (e.g. Solidity or Python). In the latter case the script interpreter is pre-compiled into the worker at build time, and scripts are loaded at runtime as a part of the Work Order. Scripts can be chosen from a list provided by the TCS, or dynamically provided by the Requester (unknown to the TCS). The specific policy enforcement is application-dependent.

In the current implementation, interactions between TCS components is brokered via a KV (Key-Value) Storage that is implemented on top of LMDB. The KV Storage Connector allows utilizing the KV Storage on a single physical system or across multiple physical systems. The Adaptor abstracts LMDB from the rest of TCS so a production implementation may choose to replace LMDB with another database of their choice.

Components shown in blue on the diagram below depict functions that are generic for all or most applications.  Components shown in orange depict functions that are always application-specific. Decentralized components (smart contracts or chaincode) running on DLT are depicted as a mix of both colors because in some cases the Avalon baseline implementation is sufficient, while in others dApp may have to differ or extend the baseline implementation.

The diagram below depicts a high level execution flow in the proxy model. 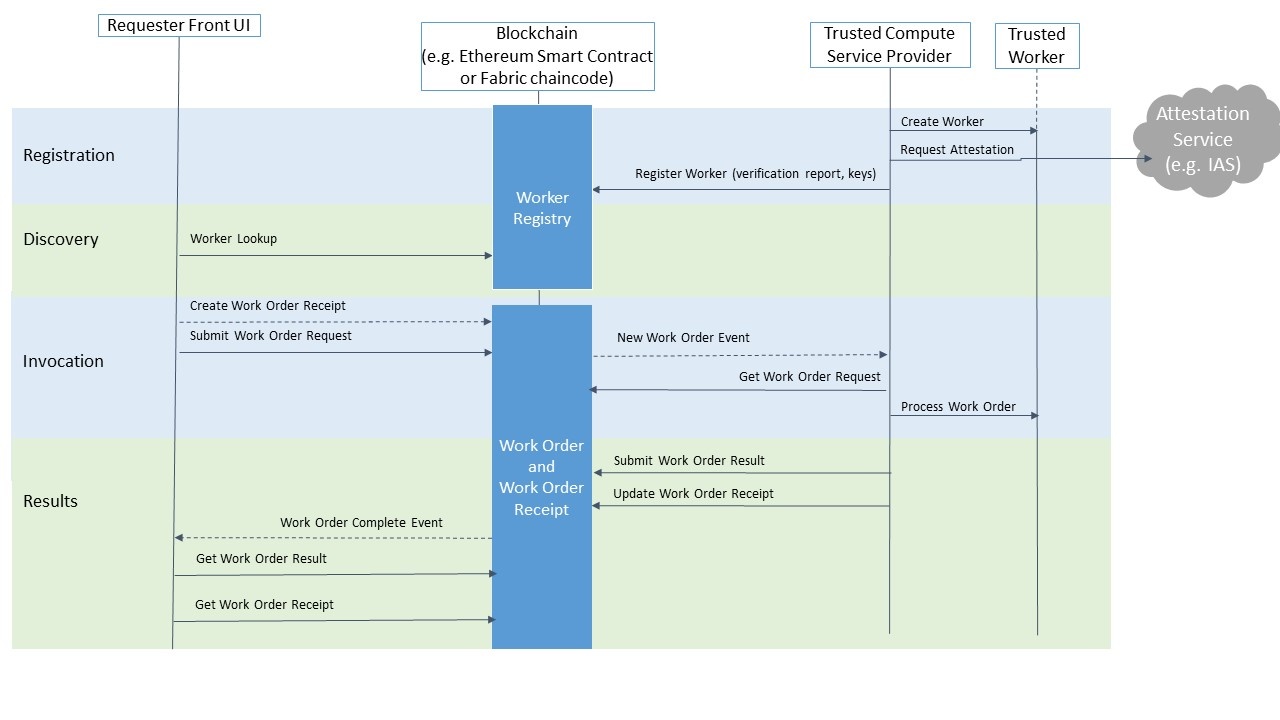 During the registration phase, TCS:

During the discovery phase a Requester looks up an appropriate Worker and validates its attestation verification report and stores the Worker’s public keys for further use.

During the invocation phase:

During the results phase

There is a growing Avalon community already. Below is list of companies that have already expressed a formal support for the project. More companies and individuals are in the process of learning and ramping up on Avalon with plans to join the Avalon project and utilize it for their product development. The number of contributors represents the initial commitments, with many companies intending to increase participation as the project advances to the next phase.

The project will be managed in a Hyperledger GitHub repository and will follow community norms present in other Hyperledger projects.

We propose creation of the following repository:  github.com/hyperledger/trusted-compute-framework

GITHUB repositories for the ongoing POC project that integrates TCF with Hyperledger Fabric:

What is the connection between TCF and Gardener? TCF and Gardener discovered each other recently and we definitely agree that there is shared scope between these two projects and both projects are interested in working together in the process of evaluating optimal collaboration options.

Chainlink works with Google–does this have any bearing (except for the Ethereum angle)? Chainlink joined TCF to contribute an implementation and use case for attested decentralized oracles.

What are the identity bindings between off-chain identities (both Enterprise and TCF identities) and on-chain identities? At this time TCF assumes that identities can be either user defined, blockchain address, or the public signature verification key of the requester.  This is an area that can be defined further, e.g. to accommodate Ethereum Decentralized Identifiers (DIDs).

Is there any current work or hooks in TCF that deals with other forms of trusted computation (such as Hardware TEEs, HME, MPC, ZK etc.)? The TCF architecture is specifically designed to accommodate additional trusted compute options (via a KV storage interface). There is a work in the process to locate potential contributors with appropriate domain expertise via the Ethereum Enterprise Alliance (EEA). Also TCF encourages anybody with such expertise to join this project and contribute additional worker types to the project.

What is the relation between TCF and Gardener projects? Gardener and TCF are separate but complementary projects. Gardener may adopt TCF core infrastructure for testing purposes during the TCF  implementation phase. In the future TCF will be one of the attested Oracle use cases. Espeo (primary Gardener sponsor) will join TCF and to contribute a monitor tool and help with implementation of Ethereum integration.

The success of this project can be measured by successful integration of TCF with multiple DLTs and, more importantly, by its broad utilization in real world enterprise-focused use cases emphasizing requirements of scalability and privacy preservation.