This project proposal template ushers originators, designers, implementers, testers of a project through community and TSC approval. The proposal should evolve organically as the proposal moves through the stages of conception, design, approval, implementation, and deployment. The project and hence the proposal may also need several iterations. In its terminal forms, it can also serve as a short manual to the features of the project for users.

Please note that readability is very important. The language of the proposal should be English, if possible, as that is the lingua franca of the community. The Chicago Manual of Style should be followed for an explanation of abbreviations, references, etc. This is extremely important as a clear statement of the problem and its technical details are helpful to coalesce the community around a solution and prompt volunteers. The outline of a project proposal is given below with comments on the sections.

Besu is an open-source Ethereum client developed under the Apache 2.0 license and written in Java. It runs on the Ethereum public network, private networks, and test networks such as Rinkeby, Ropsten, and Görli.

You can also use Besu to develop enterprise applications requiring secure, high-performance transaction processing in a private network.

Ethereum is the most popular smart-contract based public blockchain, used by over 300,000 developers around the globe. Current projects and companies vary widely — from interbank settlement, to consumer lending platforms, to games and supply chain applications. While the original Ethereum software did not necessarily take the needs of enterprises into account, Besu originated as a way to implement the Ethereum protocol while using the best practices in enterprise architecture and distributed systems, under a permissive open source license. However, unique among enterprise blockchain architectures, Besu is versatile in that it can be configured for syncing to the public blockchain or to create private, permissioned networks in accordance with the Enterprise Ethereum Alliance specification. The project was made open source in October 2018, with a 1.0 release in April 2019.

The article Why We Rebuilt Ethereum from Scratch provides some of the context and justification behind the project. Simply put, we wrote a new client to build a more enterprise-grade design and architecture, and to lower the barrier to entry for enterprises with a more friendly license (Apache 2.0) and language (Java). Design and architecture decisions have been aimed at clean interfaces and modularity, with the goal of making Besu a platform for others to build on. We have heard stories of enterprises that completed a successful pilot on Ethereum, only to be stopped from going to production because of company policies around OSS licenses. We solved that pain point by releasing Besu under an Apache 2.0 license and smoothed the path for adoption.

We have talked about our motivation for using Java in the past, but it bears repeating that our goals — to create a vibrant ecosystem of knowledgeable enterprise users while building high quality, production-grade software — are helped greatly by using Java. From IT approvals to monitoring and infrastructure tools to the massive community of Java and JVM champions, we want to make this path easier and bring in existing tools whenever possible.

There are no projects dependent on Besu in the Hyperledger community. Besu is also not dependent on any other project.

PegaSys believes that contributing the Besu codebase to Hyperledger could be mutually beneficial. We believe the introduction of a fully public-chain-compatible project to Hyperledger will help bridge the gap between public and private blockchains, and help create partnerships and integrations between the two. The Besu submission will increase the diversity of blockchain platforms offered. Additionally, PegaSys will be able to assist with ongoing standards work across business blockchain technology within Hyperledger and provide a unique bridge to the Ethereum community, the largest developer community in the blockchain space. Likewise, PegaSys believes collaboration with a top tier open source body like the Linux Foundation and Hyperledger will expose PegaSys to seasoned enterprise developers, along with best practices of running open-source community governance.

We recognize all projects submitting to Hyperledger enter with Incubation status. Besu is a production-ready project with a 1.0 release, production deployments, and a very active community. Our team reviewed the Project Incubation Exit Criteria in detail and believe we fulfill all of the requirements to meet Active status with the exception of being onboarded onto Hyperledger’s tools (e.g., GitHub, Rocketchat) and obtaining the CII badge. We will complete these steps shortly after an approval vote by the TSC. Once these few steps are completed, we believe the project would be ready for Active status and we would apply immediately for that designation. We would expect such designation to process swiftly if Hyperledger agrees all criteria are met.

Also the Besu client is implementing the EEA Client specification. It aims to be compliant once compliance testing is introduced.  Currently this involves implementation of:

What can you do with Besu?

Besu includes a command line interface and JSON-RPC API for running, maintaining, debugging, and monitoring nodes in an Ethereum network. You can use the API via RPC over HTTP or via WebSockets, and Pub/Sub is supported. The API supports typical Ethereum functionalities such as:

This function is also exposed via a Graphql interface.

What Does Besu Support?

Besu doesn’t support key management inside the client. You can use EthSigner with Besu to provide access to your key store and sign transactions.

Below please find the current view of Besu’s architecture and what would be included in a submission to the Foundation. 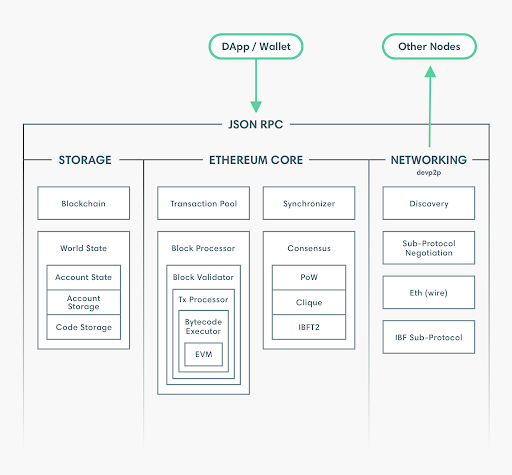 The JSON RPC layers and below in the above diagram are a part of the existing Besu implementation.  It has already reached the maturity level of being compatible and working with the Ethereum mainnet, and has been deployed in live environments.

The codebase is Java-based, utilising the gradle build system, with a multi-module based build.  Components in the above diagram match the modules and sub-modules in the gradle system.

The enterprise features are included into the above architecture as follows.

The Pantheon project, to become Hyperledger Besu, has built an extensive and active community around its project. While the PegaSys team has been, and will continue to be, leaders of the project, the external community has played a large role in the project’s development. Some data points around the project’s community include:

Because the project is already in production use and it is anticipated that those production systems move to the Besu code base as soon as releases start happening.

We propose the creation of the following repositories on Github:

We can confirm we have the CLAs on file for all non-employees of PegaSys. Since we have them, we are able to provide the DCO sign-off and the repo will pass the automated checks. We are planning on creating a copy of the current GitHub repo with the added DCO to avoid squashing commits.

We will also need a space on Jira.  There is currently a Jira instance for tracking all of PegaSys's products, mixing public and private issues in a single instance.  This makes simply moving the entire current Jira database over very difficult. We propose taking the existing issues and, over a period of time not more than six months but hopefully much less, ensure that all open issues on the Pantheon project within the PegaSys Jira are either closed or manually copied over to the Hyperledger Jira as new issues.  All new issues will be on the Hyperledger Jira instance. Happy to discuss further with the TSC.

Currently there is a very active community of over 190 members using Gitter to engage the dev community via chat.  We understand the standard at Hyperledger is RocketChat, and so we would like to see a #besu channel started, for answering basic Besu-related questions.  We will assess other channels, such as #besu-committers for the committers to use for core team communications. #besu-docs for work related to documentation creation, and add them as needed.  We will also use RocketChat for all direct core conversations. We are assessing whether we will continue to keep the Gitter channel or not for continuity purposes. We would welcome the TSC’s advice on this matter.

How Does Besu Submitting Align with Other Initiatives: As mentioned above, PegaSys and ConsenSys are already highly involved in the Ethereum community, including being active collaborators with the Ethereum Foundation and members of the Enterprise Ethereum Alliance. PegaSys knows how to work through standards across organizations because of this experience. This aligns with Hyperledger’s mission of driving coherence across the various blockchain platforms. The team is keen to continue this work within Hyperledger community.

Cross-Platform Integration: One of the main priorities of submitting Besu to Hyperledger is finding synergies and opportunities to collaborate with other projects at Hyperledger, both for greater efficiency (reusing libraries and components), to add functionality we otherwise wouldn't be able to get to, and to help customers trying to use different Hyperledger frameworks together. To further that, we plan to follow closely the activities of Transact and Ursa, by having developers that follow what's happening on each and looking for every opportunity to integrate and collaborate.  We also will look at how Aries and Indy can enhance our ability to meet the identity management needs of our users. We will talk with Silas and other Burrow developers about how we might help each other be increasingly valuable Ethereum ecosystem partners. And finally we'll engage with the developers across Hyperledger through participation on TSC calls and lists, the different Working Groups, and at Hyperledger events. We will not silo our activities in any way. We view active engagement as critical to our own success within Hyperledger, and hopefully it will bring value to others in the Foundation.

What does it mean for Besu to be an Ethereum client running on mainnet? To run on mainnet, Ethereum clients must implement specific features and comply to certain standards. Ethereum clients have standards to ensure clients can run on mainnet successfully. The Besu project currently participates in these discussions to ensure compatibility with mainnet requirements. The Enterprise Ethereum Alliance also has a set of specifications which Besu can comply to. Unlike the mainnet standards, these specifications are not all strict requirements. This project will continue to remain compatible with mainnet Ethereum and continue to comply with the Enterprise Ethereum Alliance specification at its discretion.

PegaSys and ConsenSys believe submitting Besu to Hyperledger is an exciting proposition to both organizations and we hope you consider our proposed submission thoughtfully.